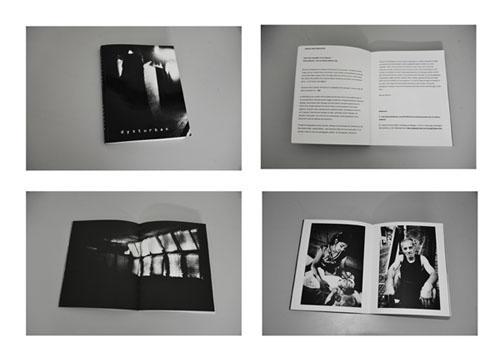 DYSTURBAN: a 110-page photobook by Konmark with an introduction ("Urban Disturbances") by Spyridon Kaprinis. A 29-page online preview is available.

'I don’t have any politics. I’m an observer.'
Charles Bukowski , Tales of Ordinary Madness [01]

Konmark’s photographs are shadowy and mercurial as one’s psyche. His black and white images portray a subdued urban environment, mainly faceless and sometimes threatening, where human figures appear to be consumable, albeit beautifully romantic in their decay. One detects the presence of an uncanny shadow, sometimes pitch black, and sometimes grainy… As Carl Gustav Jung suggests:

“Everyone carries a shadow, and the less it is embodied in the individual’s conscious life, the blacker and denser it is. ” [02]

As individuals we are unaware of this shadow but Konmark seems to be acutely aware of our visceral dimness. Homeless people, beggars, prostitutes, marginalized persons, deserted buildings, shop windows, dolls, alleyways and train stations all acquire a grainy hue of a dream, which oscillates between the extreme states of sensual pleasure and mental nightmare. Konmark's urban cityscapes have a powerful impact, reminding us of derelict and “unpopular” sites that exist amongst our daily, “politically correct” lifestyles. His dystopian “urbanscapes” are a kind of cross-breed between a post-apocalyptic, future fallout and a numb and debased cultural present.

Through his photographic journey, Konmark attempts to trace all signs of contemporary life like a restless drifter -a ghostly flâneur - who sometimes takes the exact same paths in his attempt to reach his vision of a photographic sublime. His photographs attempt to “disturb” by challenging our preconceptions regarding our so-called independent thought, our spiritual and emotional depth, and our established views on comfort, love and –ultimately – death. Dehumanization and fearfulness seem to go hand in hand with sensitivity and hope, just like every dark cloud has its silver lining. The dark figure in the corridor, the homeless man with the deranged expression, the posing prostitute, and the semi-charred doll become symbols of a tormented urban landscape, of a psycho-geography of deprivation, neglect and fear. However, there is always a glimpse of that silver lining, which may be translated as a human gesture, or as a pool of light amongst the shadows of our cities. In this vague built environment that we live, ache and die in, Konmark's photographs manage to retain all the harshness and sincerity of the world through a child’s eyes…

References:
01. http://bukowskiquotes.com/2012/05/charles-bukowski-quotes-tales-of-ordinary-madness/
02. Jung,Carl Gustav (1938). Psychology and Religion, In CW 11: Psychology and Religion: West and East, p.131. [Retrieved from: http://psikoloji.fisek.com.tr/jung/shadow.htm]
Dysturban by Konmark | Make Your Own Book